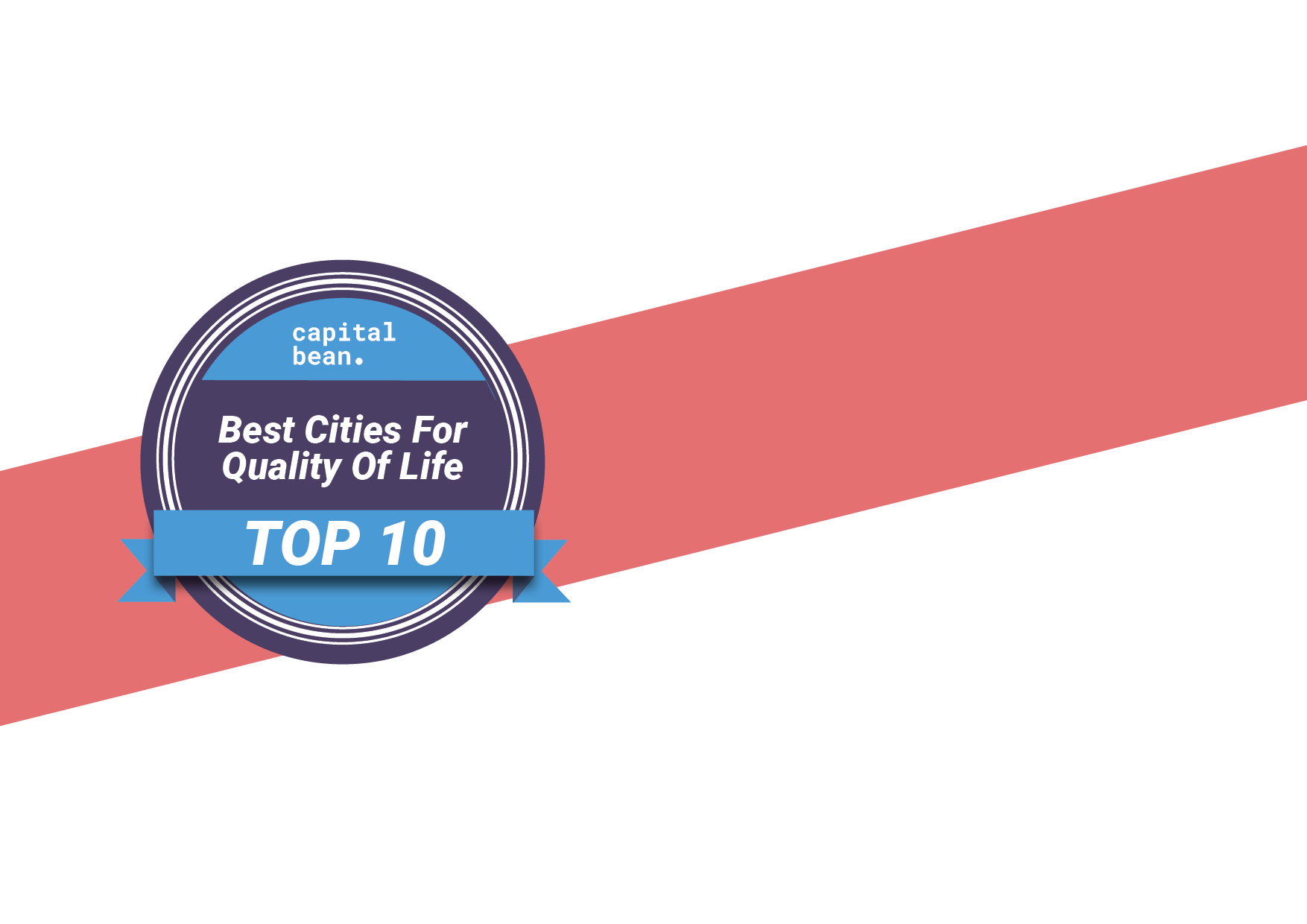 The dream – working fewer hours, spending more time with your family, and enjoying your life more. For many that seemed elusive until the world turned on its axis two years ago.

Many of us are now looking to smaller cities across the US where they can work from home more, spend less time commuting and even be closer to nature. You can find that balance in many cities across America and to help Capital Bean has compiled a list of the best places for quality of life.

To come up with the final results we looked through 176 cities across the US. The criteria was that each city had to have over 150,000 residents. We took this data from the 2021 Census Bureau ACS (American Community Survey). We looked at a number of factors – how long it took to commute to work, how long the average person worked, the percentage of income spent on housing and a number of other factors. This is how we calculated the quality of life.

What Did We Learn

Big cities aren’t always the best. All of the cities on our list had less than 280,000 people and so some of the big ones (Chicago or New York) didn’t make the cut. 50% of the cities were capitals!

Working less doesn’t mean that the quality of life is higher. And the reverse is true too. When you look at the top 10 cities with the average shortest work week you have a spread from number eight (Eugene, Oregon) all the way down to 177th (Newark, NJ). However – if you have the longest work weeks you might score as high as fifth (Cary, North Carolina) or as low as 159th (Dallas, Texas). However – the cities that scored high for quality of life all had shorter commute times. Go figure!

More financial opportunities and stability. The top 10 cities in our study tend to show that on average they spend less of their income on rent each month and have lower unemployment and poverty. They also have higher levels of health insurance.

The Best Cities For Quality Of Life

Fondly known as the Mount Rushmore State, South Dakota has no corporate income tax which probably explains large employers in the state including Wells Fargo and Citi Bank. They both have large offices in Sioux Falls. Sioux Falls sits right near the border with Minnesota and has a low unemployment rate of 2.6% which is a tie for lowest unemployment rate in our top 10. It is also the third most affordable city in the list of 177. Median gross rent is just 27% of an average resident’s monthly income. It has short commutes too at an average of just 16.8 minutes.

The Badger State! Madison is the capital and home of the main campus for The University of Wiscnsin. It ranks highly across almost all of our metrics in our analysis and narrowly missed out on the top spot. The population is 258,000 and ranks 9 out of 177 for the percentage of the population with health insurance – 93.4% in total. Unmployment is low at just 3.8% and on average those who worked work an average of 37th per week. This is 20th in our list and average commute time (19.4 minutes) comes in at number 17.

Overland Park is the largest suburb in the Kansas City area and holds the distinction of having the second lowest poverty rate in the top 10 sitting at 4.4%. It has the second lowest unemployment rate and is the third most affordable city. 32% of take home pay goes to housing. The flip side is that residents in Overland Park tend to work more than in other cities – the average work week sits at just below 40 hours which is 142nd out of 177.

Another big university city – Lincoln is home to the U of N Cornhuskers which makes it a big colleage town. It has low unemployment at just 3.6% and we would say it is pretty affordable – gross rent is just 33% of the monthly income. Even though it doesn’t sit at the top of the list for many other factors, it does well in all of them. The city has a population of 280,000 and ranks in the top 35% across the six quality of life metrics that we analyzed. It’s a good city overall and seems to be a great place to live.

Few know this but originally this city in North Carolina was called Bradford’s Ordinary named for a pub half way between Raleigh and Durham. Since 2000 the city has grown 74% to 174,000 which makes it the third largest municipality after Durhan nd Raleigh. Even though it is officially a town! It also has the second best median gross rent as % of income at 25% and a poverty level of just 3%.

Boise is the capital of Idaho and sits along the Boise River. It is beautifully located at the base of the Roky Mountains which means residents are constantly outside biking and hiking. This is made even better because residents of Boise have plenty of time to enjoy them. They work 38.1 hours per week and commutes are at the low end of just 18.4 minutes. It has a small population of just 228,057 with median gross rent sitting at just 33% of earnings. This makes it an affordable and fun place to live all year round.

Little Rock was directly translated from the French “le petite roche”. Le Petite Roche is the name of the rock in which the city was named after. Little Rock is right on the Arkansas River which stretches 1,469 miles from Colorado, through Kansas, Oklahoma and Arkansas. Little Rock comes 20th in affordability and has a low unemployment rate of just 4%. If you want a short commute then Little Rock is your place. On average the commute takes just 18.1 minutes to get to work – fifth out of 177 cities.

Home of Nike and the main campus of the University of Oregon, it’s no wonder that it has the shortest work week. Everyone who lives there wants to be outside exploring the surrounding areas. The average work week is just 34.7 hours and one of the shortest commutes in our study at just 18 minutes. However it is an expensive place to live. It’s the least affordable across our top 10 cities and 159th least affordable in the full 177 cities tha twe looked at. Rent takes up a whopping 52% of monthly income.

Scottsdale is located just 19 minutes outside of Phoenix which makes it an attractive suburb whether you work in Scottsdale or commute to Phoenix. Unemployment is low – just 3.5% of people are unemployed and it has also has a good ratio of rent paid to gross income (32%). Residents tend to work longer though with the averag work week just shy of 40 hours per week – 155th in our study.

Des Moines becomes a political circus every four years with the caucuses come to town but apart from that it ranks 16th in affordability in all of our cities. Iowa’s capital has a high % (93%) of residents having health insurance and has a short work week at just 37.8 hours. Avoid the caucuses and Des Moines is a great place to live.

The Badger State! Madison is the capital and home of the main campus for The University of Wiscnsin. It ranks highly across almost all of our metrics in our analysis and narrowly missed out on the top spot. The population is 258,000 and ranks 9 out of 177 for the percentage of the population with health insurance – 93.4% in total. Unmployment is low at just 3.8% and on average those who worked work an average of 37th per week. This is 20th in our list and average commute time (19.4 minutes) comes in at number 17.

Capital Bean looked at 176 cities with populations over 150,000. We looked at ACS one-year data and looked at the following factors:

The six variables were all weighted equally to give us an overall ranking for each location.